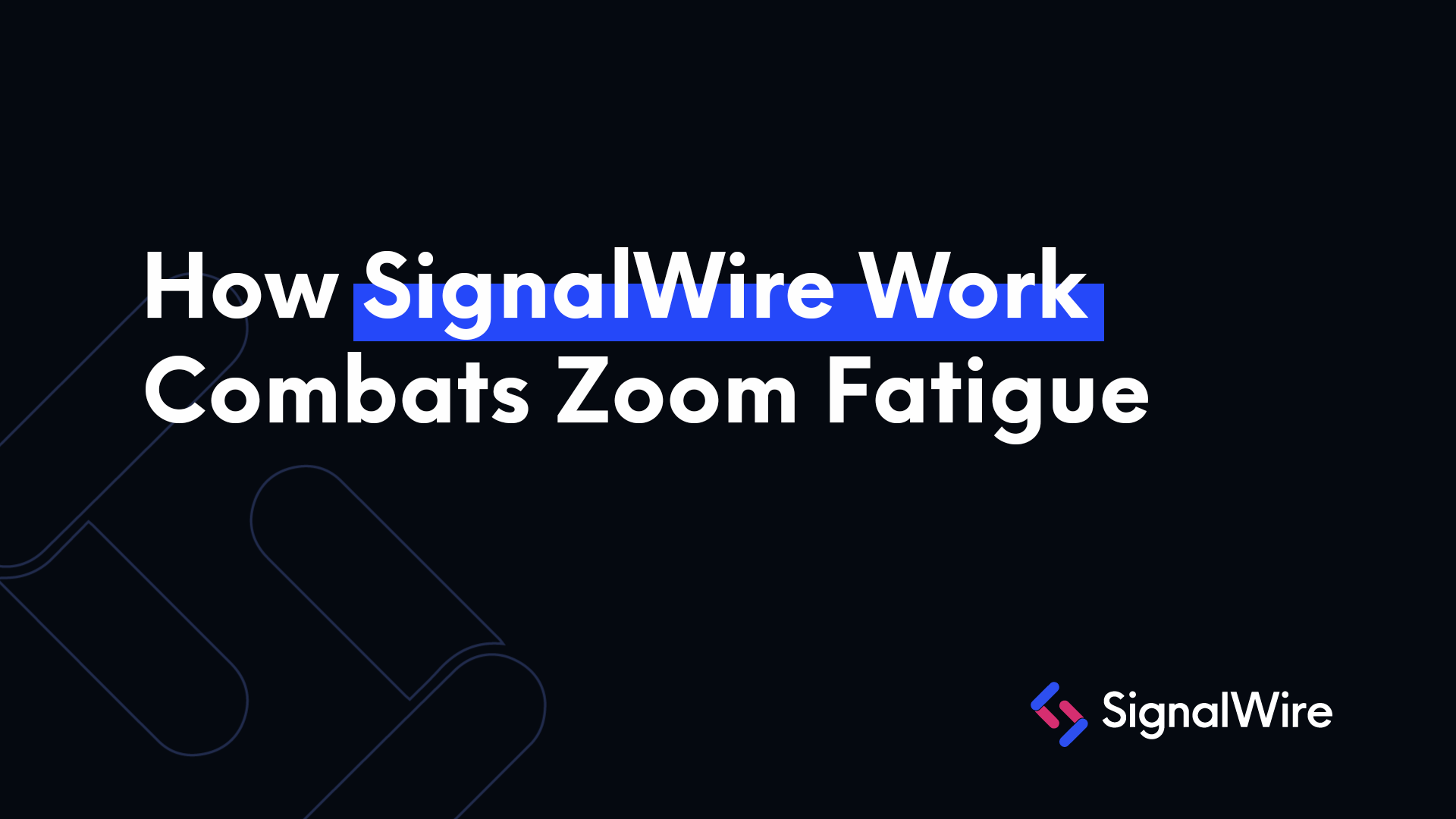 ‘Zoom fatigue’ isn’t new. People have been describing its symptoms since early last year when quarantines and working from home became widespread for more than a few weeks. It’s described as a unique kind of exhaustion that exists in spite of working in the comfort of home when a person is spending that time on video for several hours. Some people even feel more exhausted by this than a regular long day of in-person interaction.

Now that we’re about a year into widespread lifestyle changes due to COVID, more research has become available to the public on this topic. Recently, Director of Stanford University's Virtual Human Interaction Lab, Jeremy N. Bailenson wrote an article exploring the causes of Zoom fatigue. Bailenson’s research suggests there are 4 general causes: excessive and intense eye contact, constantly watching a video of yourself, limited mobility at a desk, and a non-verbal-cue overload that happens when most of your in-person interactions get swapped out for video conferencing and your brain is working overtime to interpret these interactions as it normally would. There are methods to combat each of these problems, some of which you can implement yourself in your day-to-day routine. Other issues could potentially be reduced by a larger video conferencing culture shift within companies or even by a change of platform.

For example, excessive close up eye contact gets exhausting and creates some anxiety from everyone staring at everyone on one screen, as opposed to shifting focus in an in-person setting. This anxiety can be amplified by the faces on your screen being quite large and tricking your brain into thinking your intimate personal space is being breached by strangers that normally wouldn’t be so close in real life. Or, if there are a number of faces on screen including yours, you might feel perpetually like the speaker, a situation that mimics the stresses of public speaking. Some tips Bailenson offers to combat this are simple tricks like reducing the size of your window and moving away from your monitor.

There’s also the stress of seeing yourself on camera all day long, which Bailenson suggests can be solved by hiding the view of yourself, or by focusing more on listening to the conversation instead of staring at yourself. He also recommends that companies reconsider if every meeting has to be a video call instead of just audio. If you aren’t constantly on camera, this can alleviate the anxiety of seeing yourself on screen all the time. Limited mobility while sitting at a desk all day contributes to Zoom fatigue as well, and occasionally ditching the camera allows you to move around while speaking or listening. After all, it’s pretty normal to move around an office space when meeting in person, pacing or standing up to present.

The complex non-verbal cue overload is a really interesting contributor to Zoom fatigue as it involves so many issues. It takes more mental energy to process non-verbal cues through video, which feels especially draining because it doesn’t take much effort in-person. It’s difficult on the brain when facial expressions aren’t matching up to words, or when it can’t read body language. There are also ways that video simply lies to our brains. For example, in real life, if you see one person across the room glance at someone else, that isn’t the same as watching what appears to be someone’s eyes glancing over to the person next to them on screen. Even if we aren’t actively thinking about this stuff, our brains can’t fully keep up. Perhaps recreating a virtual social environment that more closely resembles real-life could reduce some of the stress from your brain working overtime. And SignalWire Work could be just the platform to help someone rethink their video conferencing environment.

According to a recent paper by Jena Lee, MD, millisecond delays in virtual verbal responses negatively affect our interpersonal perceptions, even without any internet or technical issues. SignalWire CEO and founder Anthony Minessale has been tackling this problem for years. “In conference calls with high latency you can see that people are hearing what you say 2 seconds later than everyone is talking, so you are constantly focusing on waiting for people to hear you and talking over each other,” writes Minessale, in reference to technical issues that are common on platforms like Zoom.

So how does SignalWire Work attempt to mitigate these types of problems? According to Minessale, “In high latency situations when you talk over each other you don't even realize it's happening for 2 seconds, making it awkward, like the person is bowling over you. In low latency situations, when you talk over each other you actually realize it right away, you both stop talking at once, and like a normal social situation decide who gets to talk.” In other words, SignalWire Work is built so that virtual conversations more closely resemble the interactions of an in-person conversation. In this case, there is no awkward lag between two people trying to talk at once, alleviating the frustration that can come from multiple people talking over each other in video calls.

Additionally, using a platform that allows for a more free-form communication style could help video conversations feel more natural and less tiring. SignalWire Work accomplishes this by allowing for many virtual rooms to be open in a virtual office. Employees can come and go as they would in a real office, stopping to talk to people they might see in the hallway or gathering at the water cooler. “Rather than scheduling every call you ever have and distributing a link, when you can use free-form communication with your peers, it creates a sense of calm and makes everyone feel more comfortable being on video. They can then learn to multi-task and see each other naturally,” Minessale adds, which offers just one idea for how companies can generally rethink their video conferencing culture to help their employees fight Zoom fatigue.

One of the main goals of SignalWire Work is to create a culture where people feel comfortable working remotely how they “normally” would in-person. This means getting up and moving around if you want to, even if you’re on camera, not feeling the need to constantly use a fancy virtual background, and generally feeling relaxed popping in and out of meetings and offices throughout the day instead of planning each and every interaction as a big meeting. The platform is designed to nurture this kind of culture using its free-form communication style. That’s not to say it will fix every aspect of Zoom fatigue, but it was designed to mitigate these frustrating issues from the get-go.