Revenge of the Spam 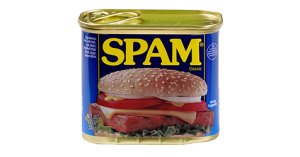 When it comes to the communications industry, nothing, and I mean nothing is worse that Spam. Spam calls and messages are worse than Spam “meat” in a can. In 2016, people in the United States of America were scammed out of more than $350 million dollars by over 29 billion robocalls. That’s about 90 robocalls per person and the number is only rising. But aren’t most people observant enough to notice a scam when they see one? It’s not always that simple…

Caller ID spoofing is the worst. At this point in time, a lot of us can recognize a spam number when we see it and although listening to our ringtone for the 1,000th time can get a bit redundant, no harm is usually done. The problem arises when I recognize the area code as local. I fall for it every time. “Oh, shoot. Is this someone I know? Maybe it’s my pizza that I ordered!” No, it’s not pizza. It’s those darn scammers. Many of these scammers can spoof caller ID from a special internet service that specializes in such trickery.

One of the most popular use of Caller ID spoofing is the Ammyy scam that cost people millions of dollars worldwide. Scammers pretending to be Microsoft tech support can display their ID as “Microsoft,” making it easier to lure in victims.

Scammers can also choose whatever area code they like thanks to modern technology. Back in the good old days, having a specific area code meant your number was registered to a specific area in a specific city. Now, phone lines that utilize Voice Over IP allow people to choose their own area codes, and most cell phone providers let you choose your own phone number. This makes it very easy to target a specific area because people are more likely to trust the number. Tricky, Tricky…

In the United States of America, and many other countries, it is illegal to falsify Caller ID information. Unfortunately, this happens anyways. So how do we fight back?

Spam vs. Scam and How they got my number:

Even if you’re not going to fall for a fake IRS scam, the incessant amount of unwanted phone calls can get overwhelming fairly quickly. While spammers are calling you legally and offering you real products that you’ll actually receive, they are still incredibly irritating. “No, Joseph from ‘Island Oasis Travel Co.,’ I don’t want to invest in a timeshare in Philadelphia. But thanks for asking.

Scammers are much more malicious. Unfortunately, the current chain of natural disasters like the hurricanes on the East Coast are a popular way to scam people out of money. Many of these scammers claim to be collecting money for charity and just pocket the money.

But How did they get my number?

How to stop the Spam calls:

Stopping scammers isn’t that easy. While the telecommunications industry is working hard to block these calls, there are many complicated legal hurdles to cross. In 2016, the FCC started a “robocall strike force” that was made up of 33 different telecom companies. The task force reported that they are currently working towards fixes that involve developing a standard authentication technology in order to verify exactly where these calls come from. At the moment, this solution is difficult because any call is able to got through multiple networks.

To Block a number using FreeSWITCH:

Never go on the internet, call anyone, or answer any calls. EVER.