Internet in America is Shockingly Slow… 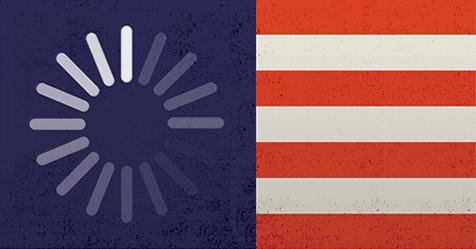 In 2018, everything is about getting things done faster. Faster Amazon deliveries, faster updates, and faster internet. For a country obsessed with being number one, the United States is shocking low on the ranking of average internet speeds.

Cable, a British data analysis firm, ranked 200 countries by their average broadband speed and the U.S. isn’t even in the top ten.

The United States is 20th with 25.86 Mbps. Here is a full ranking of countries by internet speeds.

Obviously, this ranking doesn’t mean we’re living in the dark ages and void of any internet…but in a world where a lot of careers, friendships, education, and commerce relies on the internet, it’s surprising we’re not doing better. Although, we do rank number one in cost of internet services! Woo-hoo?

Well it depends on who you ask. As with any complicated problem, there are multiple factors that go into creating it.

According to “The Communications Crisis in America” by Susan P. Crawford, major cable providers agreed not to compete with each other for territory back in 1997 and dubbed the day the “Summer of Love.” Ever since that day, internet service providers have generally been geographically segregated, with very little overlap.

Cable companies used to be overseen by local governments rather than State ones so they used to get away with a lot more shenanigans. Before 1992, many cable companies got exclusive contracts from local governments that let only them set up shop until they could build up their lines and grow out their business. By the time these exclusivity contracts were stopped by the Cable Television Consumer Protection and Competition Act, most ISPs already has mini-monopolies (or natural monopolies) over these geographic areas.

To put it simply, one of the reasons our internet is so slow is a lack of competition among internet service providers. Less competition means higher prices and less pressure to keep your product up to a golden standard. Half of all Americans only have two internet providers to choose from, and it’s common for rural areas to only have one. (In comparison, French homes have an average of seven ISP choices). When ISPs don’t keep up with the latest technology they don’t lose any customers because they literally have no other option.

Why is there no Competition?

There are giant barriers of entry for potential service providers to enter the market in the US. While current laws force these mini-monopolies to share their poles, they don’t have to share the wiring, which means initial costs can reach up to millions of dollars up-front for equipment, construction, and permits. Even then, ISPs usually don’t see a profit until five to ten years later, so it is often difficult for infant companies to find investors or get loans.

If start-ups somehow find the money, the big ISPs already have a firm grasp on the market, so it is incredibly difficult to capture market share. Many times, if an ISP start-up is threatening, the big companies will take legal actions against the newbies with the intention of drowning them in legal fees, or bribe their customers sweet deals that their competitors can’t afford. Most people don’t even try to compete simply because it’s not worth it.

From the outside, the ISP industry may look competitive…but it’s really not. Each big provider dominates their own “territory,” practically free of competition.

While we’ve made huge strides in fiber-optic lines, a lot of the United State’s internet still relies on copper wiring and America is just too big to replace this infrastructure efficiently or cheaply.

While we’re at a point where the internet is able to travel incredibly fast, it faces a bottleneck in the “Last Mile.” The Last Mile is metaphor for the copper wiring it has to go through in order to reach your house. These wires were originally designed for telephones and cable, not high speed internet, so the connection slows dramatically when it reaches the wiring. While Google Fiber is attempting to increase internet speeds and competition, it might be a long time until we see any progress. Lucky for them, they’ll always be able to make up the money in advertisers.