Amazing Women in Technology’s Past and Present 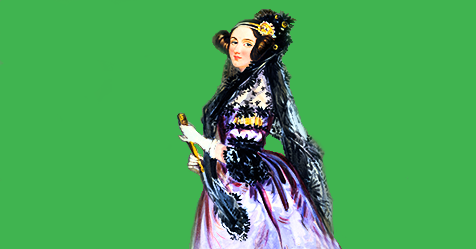 Throughout history women have been the backbone of computer science, yet many of their stories remain untold. I encourage everyone to do a little digging and find more stories like these.

Born in London 1815, Ada Lovelace is widely known as the first computer programmer. Lady Byron, Ada’s mother, hated Ada’s father, Lord George Gordon Byron the poet…and for good reason. He was pretentious, absent, had many affairs, and abandoned Ada when she was 8 years old. Lady Byron was terrified that Ada would follow in her father’s reckless poetic lifestyle so she immersed the young girl only in mathematics and science, an unusual practice for women of this time. When Ada was 17 she met the “father of the computer,” Charles Babbage, and watched him demonstrate a prototype of his difference engine, a giant calculating machine. Ada became Babbage’s protege and translated an article of his, about the machine, into English. She added her own section to the paper on how the machine could possibly be programmed with a code that could calculate Bernoulli numbers. Some historians identify this as the first algorithm to be carried out by a machine, therefore making it the very first computer program. Ada was also the first person to see the many functions a computer could have besides simply crunching numbers, hypothesizing that any content could be translated into a digital form that could be manipulated by this machine, such as music, pictures, and text. Unfortunately, Ada’s musings didn’t gain much attention until the 1950’s. So if you’ve ever read text on a computer…you know who to thank.

A lot of people are familiar with the Electronic Numerical Integrator and Computer, or ENIAC, the world’s first fully electronic general-purpose computer built in the 1940’s, but the team of the 6 women who programmed it to make its operation possible have not gotten the attention they deserve. The machine was originally financed by the United States Army as a war tool. John Mauchly is credited with the design of the computer but six female mathematicians, Fran Bilas, Jean Jennings, Ruth Lichterman, Kay McNulty, Betty Snyder, and Marlyn Wescoff were single handedly responsible for the programming and operating of the system, which involved meticulously adjusting switches manually. The programming of each switch took weeks and sometimes months to complete depending on the complexity of the math behind it. Unfortunately, at the time, the men didn’t consider this an important job. Men were more interested in building hardware while women were more commonly seen studying mathematics in order to become things like teachers. During World War II many of these mathematics teachers signed up to help with the war effort as an act of patriotism. The night before the ENIAC was to be presented, the team of six stayed up all night to fix the problems that were standing in the way of it’s success. Unfortunately these women were never recognized for their achievements. They weren’t invited to the celebration dinner after the ENIAC was announced and they were never named in any photographs that appeared in the media.

In 1930 Hopper earned a master’s degree in mathematics from Yale and later taught mathematics at Vassar while pursuing her doctorate. From the 1920s to the 1930s a high number of women were earning doctorate degrees, a number that wouldn’t be matched again until the 1980’s. After the bombing of Pearl Harbor, Hopper decided to join the U.S. Naval Reserve. Hopper later left active service to work on computers in Philadelphia. In 1952, Hopper and her team developed the first computer language called A-0 that translated mathematical code into machine-readable binary that led the way towards writing programs for multiple computers rather than just one machine. Later, the team created Flow-Matic, the very first programming language that used English commands. Hopper created Flow-Matic so that computers could be more accessible to laymen and businessmen rather than exclusively for professional mathematicians.

Fun Fact: Many people credit Grace Hopper for coining the term “software bug.” The story goes: In September 1945, Harvard’s Mark II computer was miscalculating numbers and the operators could not figure out why. Eventually they opened it up, looked inside, and found a moth hanging out inside the computer…which led to the term “debugging.” This story is almost true, but not entirely. Thomas Edison was actually the first person to use the term “bug,” meaning a mechanical error, in 1873. However, Hopper and her team really did find a moth in their computer, and immediately taped it into their log book, writing “First actual case of bug being found,” which pioneered the term being used for computers specifically and was a really hilarious joke at the time.

Allen was born in 1932 and was raised on a farm in Peru, New York. Today, she is a leader and pioneer in the industry of optimizing compilers. Allen was the first female IBM Fellow and in 2006, was the first woman to win a Turing Award. After getting her undergraduate, she earned a masters in mathematics from the University of Michigan in 1957 and immediately began teaching. Unfortunately, at this point in her life she was in a massive amount of debt, so she found her way to the Thomas J. Watson research center at IBM and taught incoming employees Fortran basics, a multi-purpose programming language created by IBM especially suited for numeric computation. Allen’s plan was to stay at IBM only until her student loans were paid, but ended up staying for the entirety of her 45 year career. Frances E. Allen is a well accomplished woman and leader in compiler research and practice.

The women of the FreeSWITCH Community.

These amazing women, who come from different backgrounds and work in varied areas of technology, talk about their experiences in the tech world.